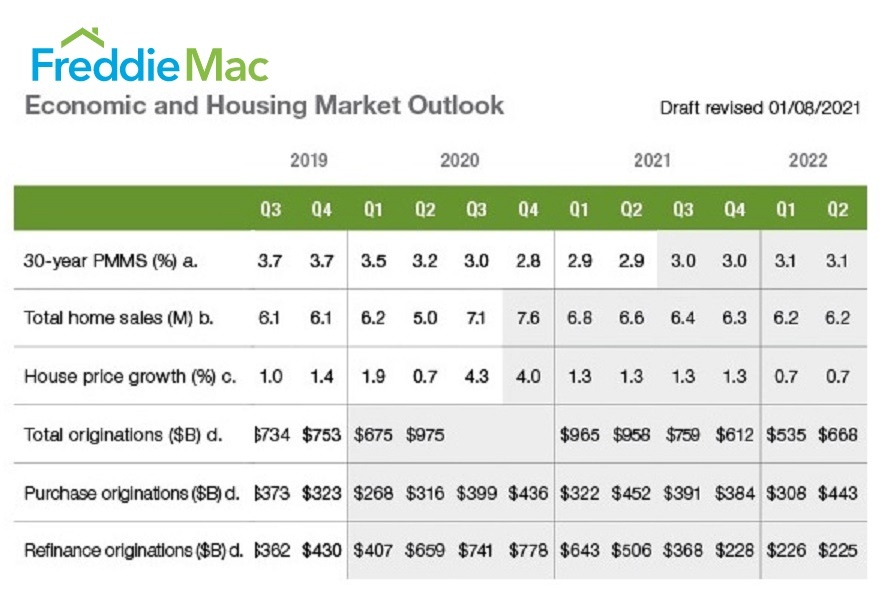 While we are in historic times, those of you who are thinking of either buying or selling a home in the next 12-18 months should work with a real estate professional who keeps up with the latest trends and mortgage rates. Following are some 2021 key takeaways from the experts!

Home Prices Increase: Experts forecast prices again will stay on an upward track. US national listing prices grew 13.3% in 2020, according to Realtor.com, and that trend will continue throughout 2022.

Sales Growth: Even as home prices rise, that won’t dampen home sales. In fact, growth in home sales in 2021 could be the largest since the 1980s, according to Matthew Speakman, economist at Zillow.com.  Indeed, home sales activity rose to its highest in 14 years in 2020, contributing significantly to the recovery of the U.S. economy. According to the National Association of Realtors, existing home sales totaled 5.64 million in 2020. This is an increase of 6% from a year earlier and the most since before the Great Recession. This winter may also be one of the best winters for the housing market, for while home sales activity typically slows down in the winter, more than 1 million units were sold in the last few months of 2020. As the activity in the slow months is higher than last year’s activity, this suggests existing home sales activity might also be higher during the peak season of 2021. NAR is forecasting existing home sales to rise more than 10% in 2021.

Mortgage Rates Stay Low: Expect mortgage rates to continue to hover around record lows. The Federal Reserve reassured us yesterday that it will keep interest rates and its bond-buying program unchanged. When the Fed buys bonds, the money supply increases and interest rates remain low, encouraging consumers and businesses to borrow and spend. With more people coming off unemployment, the housing market would be even stronger this year. Rates ended the year at 2.67%, according to Freddie Mac, a government-sponsored enterprise that backs millions of mortgages. They dipped slightly lower in the first week of January. But homeowners should expect rates to inch higher later this year.

“Homeowners should know that the low interest rate environment is as low as mortgage rates will ever get. If they want to secure a low mortgage rate, I would encourage them to do it early in the year,” said Daryl Fairweather, chief economist at Redfin, a real estate brokerage firm. She just tweeted on January 20th that the average home is only on the market for just two weeks, so let your agent know when you're ready to buy!

Lenders Report Origination Volume Up: in fact, up to four times than normal. Overwhelmed lenders even offered rates that averaged higher than those recorded by Freddie Mac to quell the volume. The Mortgage Bankers Association’s refinance activity index was 100% higher than a year earlier for the last week in December. While purchases are expected to grow 8.5% to a new record of $1.54 trillion in 2021, refinance originations are predicted to slow next year, decreasing by almost half to $946 billion.

I hope you find this information helpful. If you have questions about buying or selling a home, please give me a call! Tracy Curtis, Coldwell Banker Realty, 415-910 0599.